For several years, Wil and I have supported a handful of our favorite charities with personal financial donations. Two years ago, we decided to start our own charity foundation to expand our ability to help these charities we love by not only contributing financially, but by doing projects to help them increase their visibility so that others may help them in their own way. We are a non-profit 501(c)3 charity with no administration costs (other than our accountant who files the necessary federal paperwork for it) so the maximum funds available can go directly to help others in need.

Our foundation is technically a private foundation because we are the only ones who have donated into it thus far. Since I am the only one running it, I’ve taken baby steps toward doing more with it. I have used it to fund a rescue pet calendar project, as well as create an informational video for the Pasadena Humane Society, and continue to use it to donate financially to Planned Parenthood, NAMI, ACLU, the Ronald McDonald House in Pasadena, and a few smaller, local charities. I am slowly working my way toward doing some projects with these other charities soon but like I said, baby steps.

People ask me all the time if they can donate directly to our foundation (which I love) but I haven’t set up online access to that yet. I currently have a web designer working on designing a website for our foundation (because I am seriously technology challenged and can’t do it myself) and I’m in the process of setting up a way for it to be made a FOR REALS public charity with the ability to accept donations on our site. It’s going to take a few more weeks for that to get all set up and frankly, I’m tired of sitting on my latest idea so I’m just going to start it now.

When Wil filmed the third season of TableTop over a month ago, the game publishers sent Geek & Sundry a huge supply of the games that were being played on each episode. The crew had every guest from each episode they were on sign the covers of the game they played and Sheri Bryant (President of G & S) saved me a set of these signed games to auction off to support our charity foundation. Woohoo!

So, instead of freaking myself out at trying to do a big auction of 19 games at one time all by myself, I decided it would be better to continue my baby steps and auction off each game AFTER its episode of TableTop airs so that you can see if it’s a game you would like (way too often after a TableTop episode airs, the game company immediately sells out of that game and then it’s hard to find a copy) and if you win the auction, you immediately get the game shipped to you with the added bonus of supporting a charity! HOORAY!!

I am going to be starting my first 3-day auction on eBay on Monday, November 24th and it will end on Wednesday, November 26th with the first game of the new TableTop season, “TOKAIDO.” Well, Wil is going to help me with the auction part because he already has an eBay account and I haven’t figured that stuff out yet. Anyway, here is a picture of the signed copy that I have. 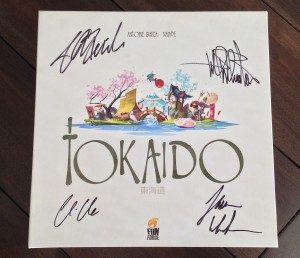 If you haven’t seen the full list of episodes for season 3 with the games that will be played and the guests on each show, I snagged it off Wil’s website so you can peek ahead and prepare yourself for the auction of an upcoming signed game that you may want for yourself or as a gift for someone you love.

When Wil and Boyan prepare for filming each season of TableTop, they play test dozens and dozens of games sent to them by publishers to see if the game is fun and will work on camera. Too often there will be a game that is super fun but just won’t work on camera so they don’t use it. When this happens, we donate those games to local community centers and charities who could use them. This season is the first time they have an episode that features kids playing a game. Because of this, we have a bunch of kid-friendly games that are fun but just didn’t make the cut. That supply of games will go to http://www.pasadenarmh.org which makes me really happy to be able to do.

Thank you in advance for joining me on this exciting new adventure. Are you ready? I’m ready. This is going to be fun!

Here is the link to the eBay auction page!