It’s Valentine’s Day.  A day that has always felt to me like a made up “holiday”  so greeting card companies and flower and chocolate sales can get their annual boost. But it’s also a day a massacre was named after, so there you go.

I met Wil on New Years’ Eve of 1995 (I wrote that story here about 6 weeks ago. If you missed it,  you can read it here. We spent pretty much all of our free time together for the first 6 weeks after we met, but had never gone on a date just the two of us. I wasn’t about to have Valentine’s Day be the first official date because it felt like too much pressure to give the perfect gift. (For the record, our first official date was February 17th because by that time, the pressure was off.) After surviving our first fake holiday together, we vowed never to get each other anything for Valentine’s Day.

Today, I am breaking that vow. For years, Wil has talked about wanting to get a tattoo. He’s been trying to figure out the one thing that he’ll want with him forever, but also something that’s small in case he can’t handle the pain of getting a tattoo. He finally decided on the one thing he always wants with him. It’s my heartbeat.

Yesterday, I stopped by my doctors’ office and picked up my EKG printout from my recent physical. The receptionist asked if I needed the printout for another doctor. I told her no, it was a gift for my husband. She looked confused, so I explained that I was breaking the “no gifts on Valentine’s Day” rule we have. This year, I’m giving my husband my heart in a totally nerdy way. It’s a gift more valuable than anything in a store, and a gift I know he already loves. 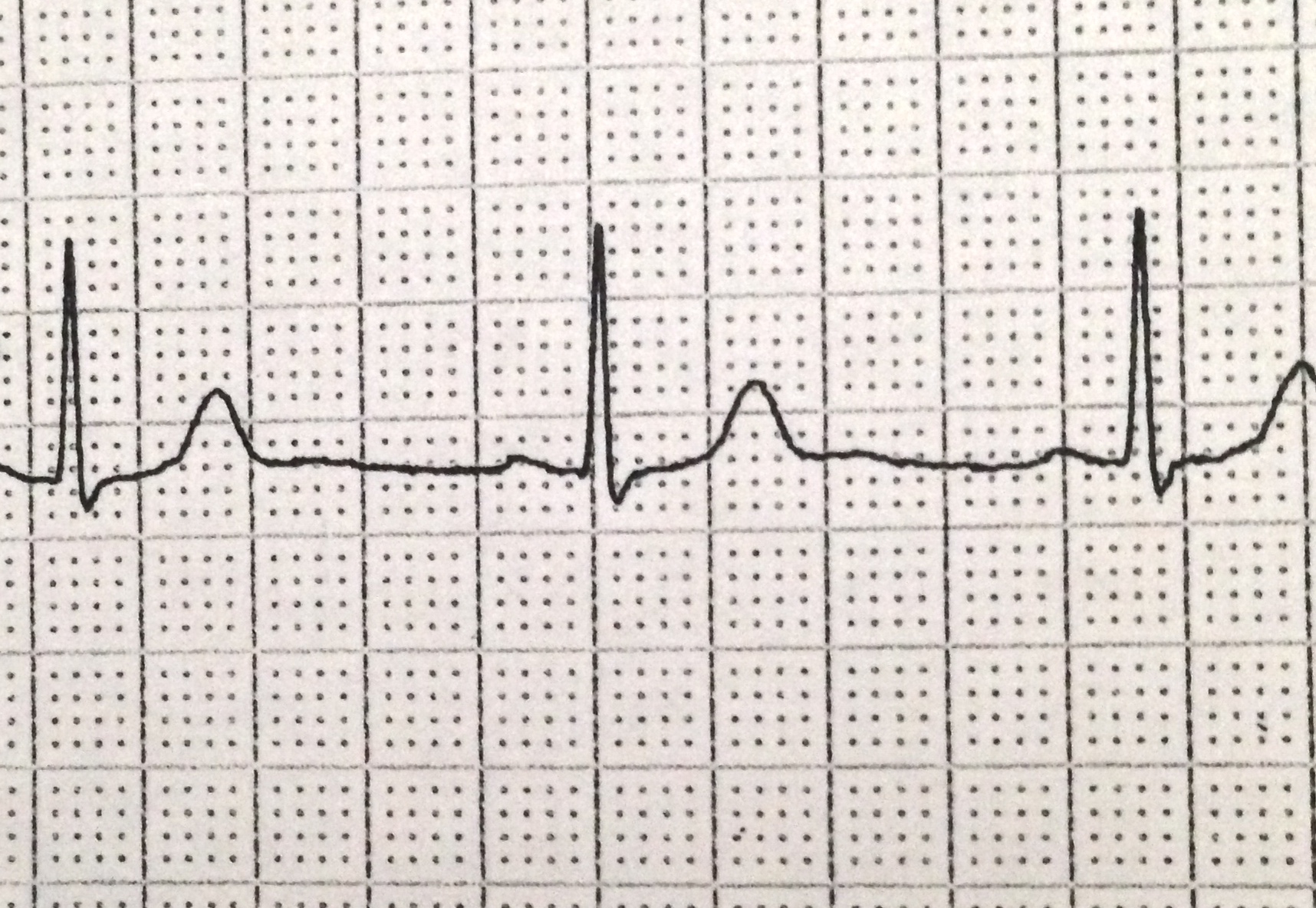 When I was 7 years old, my dad got a job transfer to move us from Arizona to Oregon. My brother and I had awful dust allergies and it was going to become a weekly allergy shot ordeal if we continued to live there. My parents found a house along the Willamette River in a city just outside of Portland called West Linn. It was a newly developing area and the house they found wasn’t completely finished on the inside. My dad liked the idea of doing the finishing touches himself, so we moved in and he worked on it on the weekends.

My dad was pretty handy but he was taking on projects that were a little beyond his capabilities. He talked to neighbors on how to do some of them, a few even offering to help. My dad would have me and my brother watch and sometimes help with these projects. He felt it was a useful skill to have, and he was right.

I lived in apartments for a few years as an adult, where they had their own maintenance people. When I moved into my first house, I was excited that I knew some basic skills to do minor repairs and improvements on my own. When projects came up that were beyond my skill level, I would ask for advice from an employee when I was in Home Depot. I always got great advice, but the best thing came in the form of a “Do It Yourself” book that Home Depot had come out with. It broke projects down by category and even broke them down at skill level. If you were super handy (like building actual things) the more complicated projects would be easier for you. I appreciated the beginners level stuff because I had some skills, but I was no master project person.

A few months ago, one of my closest friends suddenly lost her husband. She’s always been a person who could handle taking care of things, but anything related to home improvement, yard maintenance or car repairs, she had left up to her husband. Now without a husband or his income, she didn’t know how to do these things but she also didn’t have the extra money to pay someone to fix them for her. She knew I had learned ways to do things like this on my own, so she used the power of the internet and googled how to repair the things that needed repairing.

Back when I was learning all of these things, there wasn’t a way to search online for stuff, which is why I got that book. But my 51 year old friend, who never knew anything beyond how to make a clothes dryer turn on, had watched a video online that showed her how to replace the belt and the fuse in her old dryer. The sense of satisfaction she had at being able to do this on her own was immeasurable. She had even learned how to fix a leaky hose on her car,  how to patch a hole in the wall in her house, and how to work the riding lawn mower.

This may come across as a woman saying we don’t need men to do things for us, but that’s not my point. This applies to men and women. Sure, it may take a little bit longer to do on your than someone who specializes in that field.  I have to say, knowing how to repair a sprinkler, change out a light fixture, a faucet, repair a hole in the wall, lay down hard wood flooring, tile and linoleum, apply and seal grout, replace a toilet gasket, or just repair a baseboard your puppy chewed on feels pretty damn great.

Growing up, I was always the smallest of all my friends. I was very short and skinny all through elementary and junior high and by the time I started high school, I was only  5’1″ and weighed 85 pounds. All of my (female) friends had their growth spurts in 7th and 8th grade, so they towered over me, and looked more like actual girls than just a stick figure running around the schoolyard.

There were some advantages to being so small and skinny. I was very athletic, so my small stature made it easy to learn flips in gymnastics classes, plus I spent several summers teaching myself crazy tricks off the diving board. It’s easy to whip yourself around when there isn’t much to you.

By the time I was 15, most of the girls I had usually hung out with showed more interest in getting attention from boys than anything else. Since it was the 80’s, these girls cared more about finding the shortest mini skirts to show skin than anything else. I ended up making friends with more guys than girls because I could play sports and goof off with them, and none of them would talk to me about makeup or clothes or gossip about their friends the way girls did.

The boys treated me like one of them most of the time, but occasionally, they’d tease me about being little and light because all the other girls my age were significantly less stick like. I begged my mom to take me to the doctor to get my thyroid and other hormone levels checked because I wasn’t growing much in ANY capacity. The doctor assured her everything was fine and that I was just a “late bloomer” like all of the other women in my family.

By my junior year of high school, I had reached 5’4″ and 92 pounds.  Still small, but showing signs of growth. Kids at school would tell me to eat something because I was so skinny, even though ate ALL the time. I couldn’t help that I was the way I was, and it made me feel bad about myself.  People didn’t like the way I looked, and were trying to tell me how to change it, and it sucked.

I was 5’6″ and 105 pounds when I graduated from high school. Over the next couple of years, I got up to just 5’8″ and 120 pounds, eventually losing most of my stick figure status. My entire adulthood (other than when I was pregnant) I have weighed between 123 and 126 pounds. That’s just the way I am, and that’s ok.

The one thing that hasn’t changed is people still telling me I’m “too skinny and need to eat something.” All I hear when a person says that is “I don’t like the way you look. Please change that” but I can’t. Well, I guess technically I could if I ate a lot of foods that were really bad for me ALL the time but I was raised to eat healthy and when I eat like crap, I feel like crap. I have the occasional indulgences, but I don’t go overboard because I don’t like the way it makes me feel.

I’m not sure if people who say that think it’s a compliment or what, but I hear that comment every single time a full length photo of me is put online. EVERY. TIME. If I respond by saying I do eat, the response is always “Well, not enough!” or “must be a nice problem to have” or the best one, that it’s a “white people problem.”

When someone is thin, people seem to feel they should voice their opinion on how much they should eat. When someone is heavier, the voiced opinion is to eat less. For some of us, it’s just the way we’re made. Just like how tall or short we are. We can’t help it.

I guess in one sense, being treated this way my whole life has made me the kind of person who gets to know someone for who they are on the inside and not what they look like.  My closest friends vary drastically on size and appearance because it’s the person I care about, not how they look. Who cares what someone looks like, we all get old and wrinkly in the end. The awesome person on the inside is all that matters.