The first time it happened, I was 15 years old. I was walking the 3 miles home from my high school along a busy road when a guy in his 20s rode up behind me on his bicycle, grabbed my butt really hard, then continued riding up the road. Startled because I didn’t see or hear him coming, I said nothing at first. Anger took over but he was far up the road by the time I could react, which was to yell “FUCK YOU!” A lot of good that did. He got what he wanted and I couldn’t do a damn thing about it. I’m sure he just laughed and continued doing that to other young girls over the years.

The second time, I was 18 and working in a local deli. I’d been there for about 3 weeks when this one happened. It was an evening shift. The manager, a 32 year old married man who had a 6 month old daughter, rubbed his crotch up against me at the cash register. Stunned, I pretended to ignore it and worked my way over to the salad bar to busily clean it. Before I knew what was happening, the manager was behind me. Directly behind me. He reached his arm around me to pick up the tongs from the salad bar, rubbing up against me again. This time, terrified, I stepped back and told him I had a boyfriend and wasn’t interested. His response? He fired me, claiming I wasn’t a good employee and he was pretty sure the money missing from the cash register had something to do with me. I had no idea what he was talking about, but this accusation scared me and I never reported him. Who could I tell? It was late, and there was only the dishwasher dude in the back who didn’t witness any of this. I set my apron on the counter and started to leave. On the way out, he told me not to come back in there again. He would just mail me my last paycheck. I never set foot in that place after that night.

When I was 24, I worked in a restaurant in Pasadena. One evening, one of the busboys, a 45 year old married man with 3 kids, grabbed my arm and turned me around and held me there as if I were on display. He was speaking Spanish so I didn’t know what he said to the other 2 busboys, but I turned around to see they were “admiring” my butt and smiling in agreement with whatever he said to them. Terrified, I yanked my arm away and found the manager to complain. His response? He laughed it off, didn’t file an official report, but did ask that busboy to apologize to me. He never did. He just refused to work with me during my shift and they allowed it. I needed the job so badly that I stayed almost 2 more years and just never made eye contact or spoke to that busboy again.

Then there was the time a man almost cut me off on the freeway so I honked at him, worried it was because he didn’t see me there. Apparently this bothered him, so he slowed to my speed and drove next to me for about a mile. I finally looked over at him and saw he was making gestures as if he were masturbating while watching me drive. It was then that I realized men who behave like this, as well as all of these other instances , do these things as a way to assert control over women. I decided I needed to show men who do this that these behaviors in no way scare me or make me feel like they are in control of me. Instead of trying to speed away, I looked directly at the man, and laughed. Oh, did I laugh. This infuriated him and he quickly sped away, flipping me off out the window as he took off down the freeway.

Over the years, men have continued to whistle, cat-call, and yell vulgar things out of a car window as they drive by me . It happens at least twice a week, if not more. If these men are near me (say, at a construction site or at a stop light) I always look right at them and say “NOPE!” or just laugh at them, and they immediately stop. It feels good to stand up for myself now after all those years of being too afraid to.

Last night, Wil and I were at the Kings game at Staples Center. It’s in the heart of downtown and the panhandlers are always out in full force amongst the crowd when we arrive and when we leave. It doesn’t feel especially safe down there so for the most part, I usually just walk quickly and look at the ground to navigate getting through the crowd. As we were going through the crosswalk (Wil was about 5 feet away from me so I guess it looked like I was by myself) a man in a wheelchair was approaching me. He didn’t appear to need the wheelchair, considering he was navigating himself around by both feet while he used one hand to wave in people’s faces and the other hand was shaking a large plastic cup with coins in it asking for money, but that’s beside the point. I was looking down when he put this cup near me and when I politely said “not today” and kept walking, he whistled at me and made kissing noises. Wil and I both stopped dead in our tracks and looked back at him and yelled “REALLY?” as he just stared at us as if he couldn’t believe we said something back. I was mad and said “This is all you get, pal” and held my hand straight out in front of me in a thumbs down gesture. I know. Dumb. But at the time, I wanted to stand up for myself and that’s the first thing that came to mind.

On our drive home, I thought back to all these instances I wrote here (and countless other ones that just become more of the same story) and wondered why some men behave this way. I know not all men are like this but I am fairly certain all women experience this at least once in their lives. I’ve heard men brush off these comments and/or gestures as “You should take it as a compliment” which is so odd to me considering these are not said in a kind, considerate, complimentary way. Who raised these men to think women want to be treated this way? Ugh.

I am grateful for the two young men we have raised who don’t treat women this way. Teaching kindness, compassion, and respect for others goes a long way in putting adults out into the world who can balance out the yuck. We just need more of them out there, so if you’re a parent of a boy, please teach them well. Our society needs it.

About a month ago, Wil and I launched our new book, A Guide To Being A Dog by Seamus Wheaton. If you haven’t seen it yet, here it is! 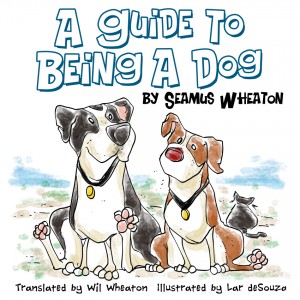 The book is compiled of silly tweets Wil wrote over the last year as if Seamus were giving advice on how to be a dog. I thought it would be really cute if Seamus said these things to our younger dog, Marlowe, seeing as how she is newer to our house. I then had our artist friend, Lar deSouza, illustrate it and it turned out SO CUTE. If you’d like a copy for yourself, they will be available through our foundation until October 20, 2015. We are donating the proceeds to the Pasadena Humane Society and SPCA and so far, it’s raised over $26,000 for them. Hooray!! https://www.increaseawesome.org/2015/09/07/a-guide-to-being-a-dog-by-seamus-wheaton/

The other thing we thought would be really fun would be to host our very first charity event to support this new book release, along with some yummy extras that we love. At this event, attendees will be able to try w00tstout, the beer Wil collaborated on with Drew Curtis, Aisha Tyler, and Stone Brewing Company, and get to keep the adorable glass it’s served in that has a scaled-down version of Seamus’ paw print engraved on it. You’ll also get a copy of A Guide To Being A Dog by Seamus Wheaton with his PAWTOGRAPH (that’s right, I said that) because we had a stamp made of his paw print! Wil and I will sign it for you as well, if you’d like. The event will be held at Crossings Restaurant in South Pasadena where they will be serving all kinds of tasty Kobe beef sliders and fries for dinner (soak up that w00tstout, baby!) and ice cream sliders for dessert. SO MUCH YUM.

We are so excited to do this event (it was originally scheduled for September 22nd but due to a delay in receiving the books from the printer, we rescheduled to October 20th) and hope you can make it so we can hang out and have burgers and beer together. And the best part, proceeds from this event will be donated by Crossings to the Pasadena Humane Society and SPCA as well. Everyone wins! Information on the event can be found here.https://www.increaseawesome.org/2015/09/09/fancy-dinner-burgers-beer-a-book/

Making this book and preparing to host an event has been so much fun to do. For those who are unable to attend but have ordered a book online, I am dropping off our first shipment of them today. Yay! We appreciate your patience while we’ve been setting this up. Our foundation does not have a staff, it’s just me and Wil and our dining room as our shipping department. No staff to pay means maximum funds available to support charities we love. Thank you for your donation and we hope you enjoy the book!