Twelve years ago, we adopted a nine month old dog to be a companion for our other rescue dog, Ferris. We named this sweet, little white dog, Riley. She had been found locked in a closet at an abandoned hotel that was about to be torn down, so she was anxious as hell about everything but boy, did she love people. She and Ferris got along great, until they didn’t. At least once a year out of nowhere, Riley would start a fight with Ferris. Ferris was not aggressive by any means but as the pack leader, she didn’t back down to this and Riley always ended up with a couple of stitches.

When Ferris died unexpectedly from cancer 6 years ago, we were introduced to a seven month old puppy when we did the Wiggle Waggle Walk for the Pasadena Humane Society in Ferris’s honor, six weeks after her death. We hadn’t planned to get a new dog yet, but Seamus was so mellow and so good with all of the dogs and kids at the walk, that we decided he would be a good companion for Riley, who was very mopey since Ferris had died. They got along great, until Riley decided they didn’t, and would try to start a fight with Seamus. Seamus being so young and looked to Riley as a pack leader, would immediately roll on his back and the scuffle would be over.

A couple of years after getting Seamus, Riley’s physical health really declined. She had horrible osteoarthritis in her knees and it eventually moved to her elbows. She fell a lot as a result, which appeared to make her anxiety worse. She had developed a growth in her abdomen and one near her heart, and was not interested in playing with Seamus at all. The vet was unsure how long she would live, so we did our best to make her happy and comfortable. We also decided that a “transition” companion dog for Seamus would be good so he would still have someone to play with, and the loss of Riley wouldn’t be as devastating to him as losing Ferris was to Riley. This is how Marlowe came to live with us two and a half years ago.

Even being an energetic four month old puppy, Marlowe sensed Riley’s limitations and looked to Seamus to play and snuggle with. Riley joined on her terms, but didn’t stick around long. Marlowe had figured out that Riley just liked to stand on the lawn and butts-up bark at Marlowe because she liked to watch Marlowe run laps around the lawn. Marlowe happily obliged and ran those laps with a huge grin on her face. But occasionally, out of nowhere, Riley would snap at Marlowe in an attempt to start a fight over nothing. Marlowe would roll on her back and we would get Riley away, but I was really worried about her behavior with now two strong dogs in the house.

We hired a private dog trainer to come see the dynamic of our dogs in our home as well as their behavior when we took them out for walks. The first thing she asked us was who we thought was the pack leader of the three. We both said Riley because she’s the oldest, plus she has always asserted herself as the leader. We were wrong. It was Seamus. She said the pack leader never has to assert themselves as such, and Riley, who has always fought for that, was doing that because of her anxiety and because she knows she is weak. We learned ways to help Riley manage her anxiety, whether it was giving her her own chew toy in another room when Seamus and Marlowe were playing, or wearing a Thundershirt, which is like a compression garment intended to be calming and soothing. Nothing worked.

A couple of months after adopting Marlowe, all three dogs had run out into the back yard one evening because they heard a noise. Marlowe, being the energetic puppy, tried to bolt past everyone and bumped Riley, which hurt Riley’s arthritic knee. Riley redirected her anxiety from the situation onto Seamus by attacking him. I ran outside to see little Marlowe tumbling under Riley’s legs as Riley was trying to bite Seamus. Because I was home alone, I had no choice but to slide Marlowe out from under all of this and leave Riley and Seamus in this fight so I could get Marlowe inside to safety. It was the first time I understood the pack leader status as I watched Seamus just try bearing his teeth to get Riley to stop, who wouldn’t obey him. She just kept lunging at him, so Seamus did what pack leaders do to protect the rest of their pack by gently holding her on the ground by the neck. Riley was so neurotic that as soon as he let her go, she would lunge at him again. At one point,  I made the stupid move of trying to step in the middle of them to block Seamus from Riley, and in the process, Riley bit my thigh. My scream made her let go and Seamus knew he had to protect himself and me, so he held her down by the neck until my neighbor jumped my fence and came over to help me separate them. I wrote about this (with horrible photos, you’ve been warned) on Google+ afterward.

I knew Riley wasn’t being aggressive toward me and for two weeks after the incident, she followed me around, sniffing at my thigh with her head down and licking Seamus on the face as often as she could. Both submissive acts of behavior, so I hoped this would be the end of it. Unfortunately, a couple of months later, she again tried to start a fight with Marlowe out of nowhere and Seamus stepped in to protect Marlowe. Wil jumped in to break them up and in the process, Riley bit his wrist. Again, unintentional, but something needed to be done.

I took Riley to the vet the next day. I was in tears as I explained Riley’s behavior, which seemed to be getting worse with age. At 11 years old, I knew the behavior wasn’t a thing that could be trained out of her. I didn’t want to find another home for her; she’d been in our home her whole life. I could see that she was like an angry, dementia woman who acted out over nothing. She still had health and life in her, so we didn’t want to give up on her. Our vet suggested Prozac, which can work wonders on dogs with anxiety. We tried it, and immediately saw an improvement in Riley. The dose was good for about a year, but it had to be increased about 8 months ago, when her mental state seemed to be worsening. It helped so much, but the reality is she was getting really frail, which still made her anxious, and on top of it all, she had become pretty deaf.

We did what we could to make Riley happy and ease her pain and her anxiety. While Seamus and Marlowe played outside, Riley would get toys she could tear the fluff out of, which she loved. Wil and I would take her for walks alone, so she could smell all the smells, and go at her own pace with special time just the three of us. She loved to get loved on by our friends who would come over, always bringing her happy face and all of the fur she could shed on everyone’s clothes. Nobody cared that they were covered in her fur, everyone just loved how happy and affectionate she was. She was still anxious and more frail than ever, so I would step in and have her go lay down somewhere if I saw in her eyes that she was stressed.

On Easter Sunday, Wil and I went to Santa Barbara for a couple of days of relaxation following a very intense week of filming that Wil had just done. Our son, Nolan, was housesitting for us, which he’d done dozens of times, so I knew the animals were in good hands. While we were at dinner, Nolan called me with some awful news. He had fed the dogs and Marlowe came over to sniff Riley’s dish. Riley snapped at Marlowe, so Seamus jumped in to protect Marlowe. Marlowe got out of the way and as Riley was going after Seamus, she hurt her leg and couldn’t get up. Nolan knows she has bad osteoarthritis so he assumed her leg was broken, and had rushed her to an emergency vet. The vet called me a short time later to tell me Riley had dislocated her hip, which is very painful. They would have to put her under to push it back into place but because her osteoarthritis was so bad in her knees, they would have to tape her back legs together for six weeks to stabilize her hip. This would result in horrible pain and discomfort and make her anxiety even worse. And because of her age, the hip would most likely continue to dislocate, negatively affecting the quality of her life, and continue to cause horrible pain.

By this time, our other son, Ryan, was at the vet with Nolan, waiting to hear about Riley. The vet had given her pain meds, but Ryan said even with those, she looked so unhappy and still in so much pain. At nearly 13 years old (her birthday was yesterday) we didn’t want the end of her life to be about so much pain and misery. We decided the humane thing to do was to have her put to sleep so she wasn’t in pain anymore. We couldn’t stand the thought of keeping her doped up for two hours just so we could be drive back to say goodbye, so the kids were with her until the end.

I have been a sobbing mess since this happened. We came home early from Santa Barbara to be with our kids and our other animals. There is an emptiness in our house without Riley here. She was a tough dog to deal with all these years, but I know we did everything we could to give her a good life. I hate that it ended the way it did, but in a way, I always knew she would somehow go as a result of starting a fight.

Riley became known as the “I’M A DOG!” face with all the pictures we put of her on the internet over the years. The outpouring of love and support from real friends and internet friends has been so overwhelmingly kind. From planting flowers in her honor, to making donations to local shelters in her memory, to even registering a star in her name just so I can look up and think of her every night, is so unexpectedly wonderful. I love that this sweet, oddball of a dog has so many people who cared about her and will miss her goofy face as much as we do.

Goodbye, little girl. We love you. 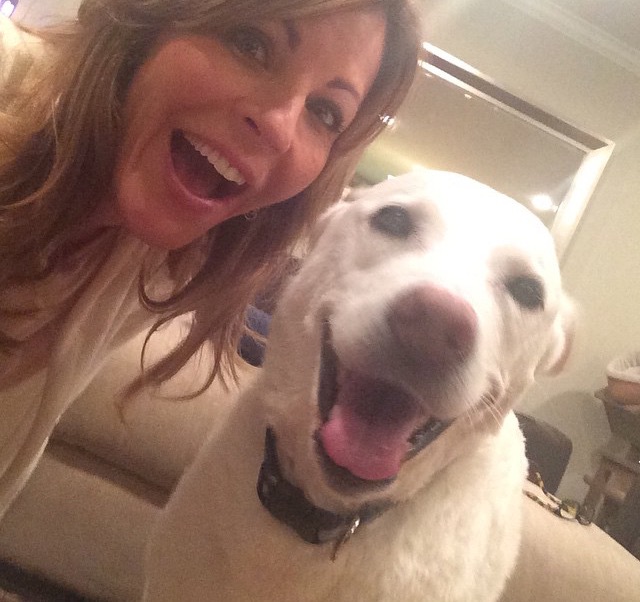 77 thoughts on “In Our Hearts Forever”