Let me start by saying there will be no movie spoilers in this post, so you’re safe to continue reading. Let me also tell you that I am not normally a superhero person, but Wonder Woman has always meant something to me. Not because she’s a badass (although that is an added bonus) but because when I was little, I thought I was related to her. I’ll get to that part in a moment. First, a spoiler-free comment about the movie:

It’s amazing and you should definitely take your kids to see it or go see it with a group of friends. There are a couple of little things in the movie that seem more like the studio wanted it than what the screen writer and director, Patty Jenkins, (who did a phenomenal job, by the way) had a vision of. I could be wrong, but those moments weren’t deal-breakers for me, so it’s fine. I would definitely go see it again.

Ok, now that we’ve gotten that part out of the way, let’s get to the part where I’m an adult who ugly-cried in a superhero movie.

If you’ve been around for say, the last 75 years, you’ve probably heard of Wonder Woman. If you were around in the 70s and had a tv, chances are you watched the Wonder Woman series where Lynda Carter brought this character to life. If you were like me, not only were you fascinated and impressed by this person who could deflect bullets with cuffs on her wrists, or use a lasso to get people to tell the truth, but you learned a valuable lesson in compassion and empathy for our fellow humans, and wanted to work hard to make the world a better place for all.

Before this movie came out, I hadn’t watched the trailer for it. The first time I saw the trailer was today when I searched online to watch it before I started writing this post. I knew the movie was coming out soon, so I figured I’d eventually go to the theatre with a group of friends to see it weeks after it was released. But my friend, Jenna, had passes to go to the premiere last night and asked me if I’d like to be her date, so of course I said yes. When we arrived at the Pantages Theatre for the screening, I took this silly photo of the empty carpet behind us as we entered the theatre and posted it to Twitter, saying “The Invisible Jet was parked on the carpet AND I GOT A PHOTO OF IT!” And yes, I’m still laughing at my stupid joke, but whatever. IT’S FUNNY. 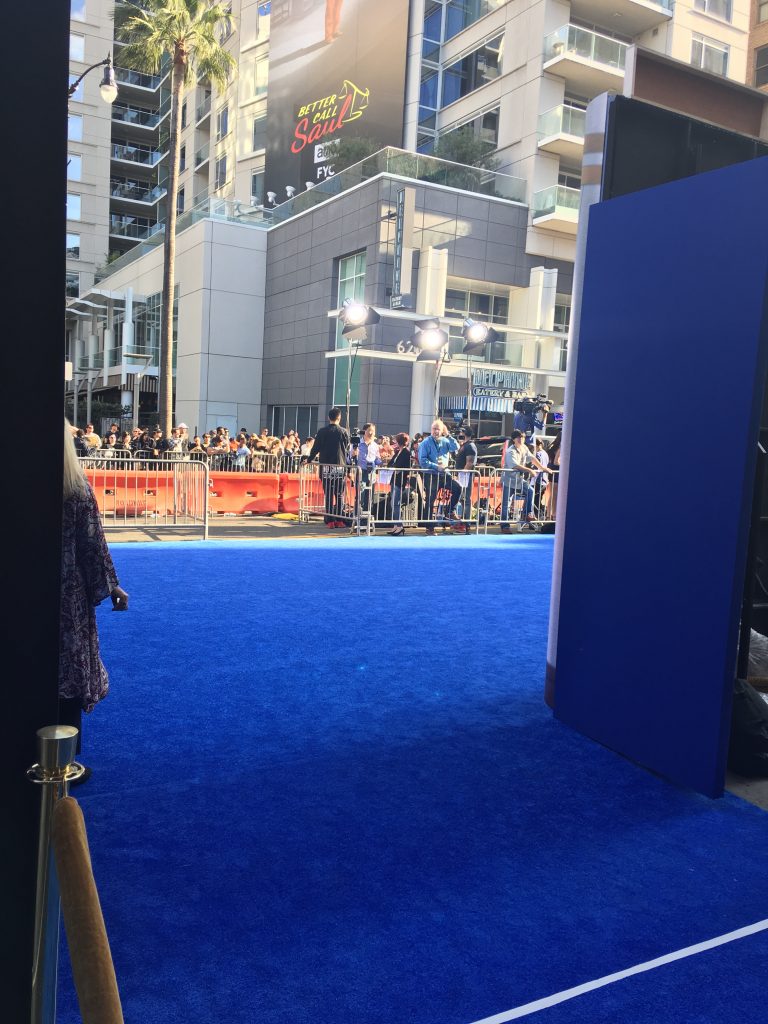 Once inside the theatre, we made our way to our seats, and the movie began. Again, no spoilers, but there was a moment early on in the movie that made me tear up, which I didn’t expect, so I quickly wiped my eyes. Throughout the movie, there are many funny parts, a ton of incredible action sequences featuring many badass women (Robin Wright being one of them, whose character trains Diana to be the Amazonian Warrior Princess she eventually becomes.) When the movie ended, I found myself in tears. Like, big time “oh god I feel like I’m about to ugly cry let’s get to the bathroom quick” kind of tears.

Again, no spoilers, but this story hit me right in the feels. We all know she’s about fighting for justice, how she cares about people and wants to help them in any way she can. She sees suffering and wants it to stop. She sees how the selfish actions of others will cause lives to be destroyed and even though she has the best intentions, she knows she can’t save everyone. Growing up, she was constantly reminded that she’s stronger than she believes, and her own efforts can and will make a difference in the lives of others if she tries hard enough. All of this sound familiar? Hello, current state of our country. I know it took a couple of years to make this film, but it feels relevant to our lives in so many ways that it almost feels like the filmmakers knew this is just what we needed to see right now.

After finally composing myself, Jenna and I made our way over to the after party. We walked around so she could take pictures of the costumes on display from the movie (which are posted on @ComingSoonnet Twitter account if you want to see them) and we eventually found a couple of our friends there so we stopped and chatted with them. My friend, Courtney Simmons, whose job is SVP, Publicity & Communications (and an all- around awesome person) at DC Comics, found me and came over to ask what I thought of the movie. I won’t give details on that conversation because MOVIE SPOILERS, but I also told her why I thought Wonder Woman was related to me when I was a kid. She thought it was a great story and said “Come with me. You should tell Lynda Carter this story.”

I was a little hesitant at first because I didn’t want to bother her, and I am not normally one to ask for a photo or an autograph from a celebrity, but that wasn’t what this was about. This was about a person who created a wonderful childhood memory of mine and she has no idea. It was about gratitude. And in a world where things like gratitude should and need to be shared more often, I agreed to follow Courtney over to her. She introduced us, and then I sat down on the sofa next to Ms. Carter and told her this story.

When I was a kid, I was CONVINCED I was related to Wonder Woman because my (maiden) last name was Prince. Diana Prince was obviously just a relative I hadn’t met yet, but when I did, I assumed I’d get to ride in her Invisible Jet where she’d take me to the family vacation spot known as Paradise Island. You know, like family does. Although we never met (and I grew older and realized we weren’t actually related) the values Wonder Woman had stuck with me for my entire life. I finished my story and Lynda smiled and said “I just love stories like this. You have such a sparkle in your eye when you tell it so I know how happy it makes you. Thank you for sharing it with me.” We talked for a few more minutes about how Gal Gadot, in her own (super kick-ass) way did such an incredible job carrying on this torch of a character Lynda first got to play over 40 years ago. I showed her my silly picture of her Invisible Jet parked on the carpet out front, which she thought was hilarious, and then I said my goodbyes and made my way out of the seating area.

Courtney stopped me as I was leaving to introduce me to Lynda’s husband, Robert. Courtney told him I had a childhood Wonder Woman story I shared with Lynda, and Robert thanked me for telling her about it. He said all she ever wanted was for the Wonder Woman character to live on and inspire others, and it finally happened. As he was saying this to me with a huge smile on his face, tears of joy filled his eyes, which of course, made me cry as well. I walked back to my friends, and looked down to see I had a text message on my phone from Courtney. She had taken a photo while I was on the sofa talking so I could see how happy I looked when I told Lynda my story.  I didn’t know she was going to do that, and I don’t know what I was saying at this exact moment, but I love everything about this picture. 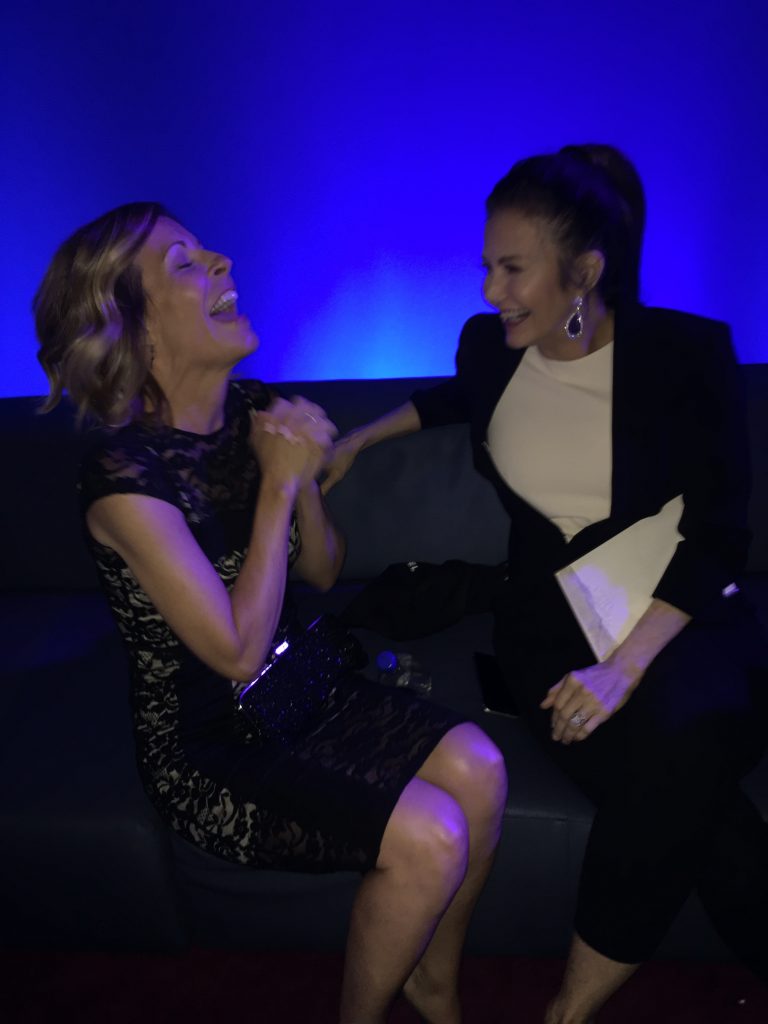 It was getting late, so my friends and I made our way out front to the sidewalk to wait for our ride. As I was standing there, I turned to see Robin Wright next to me. We made eye contact, so I leaned closer and quietly thanked her for being part of this movie. The things she gets to say to encourage Diana to be the superhero she eventually becomes is so inspiring to hear, and I wanted her to know that. She thanked me and said “Isn’t it great that kids get to see this and hear those things? I’m just so grateful I got to be part of it!” and then she hopped in her car and left.

Once home, I tried to give Wil a re-cap of the night, but I was still pretty emotional about my whole experience, which made cry again. GEEZ. I know not everyone is going to have the same reaction that I did when they see it. I’m sure some moviegoers just love that Wonder Woman FINALLY gets to have her own movie. Some may want to see it because it’s an action/superhero movie and they love those types of movies. But I have a feeling that women especially (of all ages) will see this and be inspired because we truly are stronger than we believe, and in our own unique way, we are all Wonder Women.