Last summer, Wil and I were walking through our neighborhood when this adorable, fuzzy kitten came running up to us. She was very affectionate and clean and obviously belonged to someone. She was only two houses away from a very busy street and because she wasn’t very big, I was worried this was a kitten who accidentally got out of a house and needed to get back in, so I went to the door of the house she was closest to to see if she belonged to them. The man living there said she had been around for about 8 days so he was feeding her, but had asked all around the neighborhood and put up a local lost pet posting on Facebook, but no one claimed her. He already had three indoor cats and a wife who was about to have a baby, so he wasn’t able to take her in. I offered to take her home and find her a place to live so she wasn’t out near that busy street, which he thought was a good idea, so I carried her back to our house.

This kitty was so stinkin’ cute and affectionate but I knew we couldn’t keep her. Our dog, Riley, had passed away four months earlier and as much as we loved her, she was difficult to manage the entire twelve and a half years we had her. Riley had been found locked in closet in an abandoned apartment building when she was three months old and that caused a lifetime of anxiety for her. Ideally, Riley would have been better off in a home where she was the only dog and maybe one cat as a companion, but I was determined to help her and so the whole time we had her, it was a struggle to make it work. Once Riley had passed away, the dynamic among our other pets had changed to be much calmer and now here I am with this kitten, knowing if we kept her, I’d be changing the dynamic in our home again, and the other pets may have an issue with it.

I took this kitten to our vet to check her for a microchip and she didn’t have one. I had them test her for feline leukemia and kitty AIDS and she was negative for both. She was barely five months old and who knows if she’d had vaccines, so I got her a round of vaccinations and a flea treatment so at least if she was going to be around my other pets until I found her a home, they would all remain healthy. Of course over time with this kitten, I completely fell in love with her after sleeping in another room with her every night where she snuggled into me, and was super affectionate and playful during the day. She spent a lot of time with Wil in his office while he worked and he fell in love with her as well, so we decided to keep her. Over the next couple of months, it was very hard trying to get our two dogs and our other two cats used to her, which made us constantly doubt our decision to keep her. We would go back and forth on whether this was the right fit, but every time I thought of her not living with us I became a crying mess, so we just kept trying to make it work.

Our cat, Luna, has been pretty cranky about basically everything her entire life. I know some cats are just like that, but it’s weird to me to have one of my own. Sure, she can be super sweet and affectionate on her terms, but she would just walk up to Watson when he was sleeping and smack his head, and she was never particularly happy about Marlowe coming into our home a few years ago. Luna was adamant about being let outside (she and Watson used to belong to our son, where they were always indoor/outdoor cats) and a few months before we brought this kitten home, Luna had started to spend more time hanging out with a neighbor three houses up from us, who don’t have any pets at all. Luna had found a place to be queen and once we decided to keep this kitten (we named her Eliot) Luna was having NONE of it and basically moved in up the street. I was heartbroken at first but it’s an elderly couple who adore her and she runs the show in their house and they all love it. Luna is so happy there and she obviously wasn’t happy being around other pets in our house, so we weren’t going to force her to stay with us. Plus, she’s so close that we walk up and visit her all the time. She’s always happy to see us and lets us love on her and she’s affectionate back, but she makes it very clear she is not coming home with us. After that happened with Luna, we started noticing that our other cat, Watson, who is honestly the most patient and loving cat I have ever had, was not into Eliot wanting to play with him every time he came into the house. He’s about seven years old and REALLY not at kitten energy level at all. He would tolerate her and probably played with her three times over the last 10 months, but it was sad to see Eliot wanting to play and the only other cat in the house really wasn’t interested in joining her.

Over time, Eliot was displaying typical bored kitty behavior. She would get into things, on top of things, and just be adorably rotten. I didn’t blame her for this, she was bored. She couldn’t just race around the house because although Seamus had gotten used to her, Marlowe still hadn’t and so anytime Eliot ran in the house, Marlowe wanted to go racing after her no matter how much we tried to train that out of Marlowe. We would rotate the animals and put the dogs outside for a bit so Eliot could race around without interruption but after 10 months of trying to juggle all of this, Wil and I realized it isn’t fair to Eliot, and it isn’t fair to our other pets to try and force this dynamic to work. We knew it was time to find a home that was a better match for Eliot; a place with another cat her age and energy level. A dog would be okay because Eliot doesn’t have a problem with that, but the dog would need to be okay with her, and so I began the search.

I love Eliot to pieces and I still wanted to be able to see her, just like Lucy, that tiny dog I took in and fostered and fell in love with but knew I couldn’t keep, so my friend took her. I needed Eliot to be with someone I knew and trusted and in a home I knew she would be happy and safe in. I decided to write a post about it on my private Facebook page since I only have friends and family on there, and most of them are local. This way Eliot would still be nearby and I could visit her. I also wanted this to be an ideal situation for everyone involved so whoever wanted to take her would need to come to my home and spend time with Eliot to make sure her personality would fit in with the pets already in their own home. If, for whatever reason, a week or months down the road it doesn’t seem to be working out, I will take Eliot back and continue to find the right place for her. Just giving her away and letting someone else deal with it was not an option.

Some friends said they would be interested in taking Eliot since they had been thinking about adopting another kitty soon anyway, and it seemed like a pretty great situation for Eliot to go to. They have two other kitties that are extremely playful and just a couple of months younger than Eliot. These friends came over about three weeks ago to meet Eliot and after a couple of hours of really getting to know her, they felt it would be a good fit and so they took her home. I was a crying mess as they left with her but I knew it was right for Eliot. It’s so hard because I feel like a pet parent failure, but I’m trying to look at this as a 10 month fostering while we found a perfect home for her. I thought our home was it, but it turned out not to be the case, and that’s okay. I went over to their house about 3 days after our friends took her home, and Eliot seemed very happy and very comfortable there. She was cruising around like she had always lived there and she loves our friends who took her in. The two kitties already in the home were a bit freaked out at first, but they are slowly warming up to her. What makes me really happy to see is Eliot seems very patient and respectful of the limits of the other two kitties and she doesn’t run after them or try to tackle them like she did with Watson. We’re all still treating this like a trial period because I wouldn’t want to have her in a home where the other animals there aren’t comfortable with her, and I really want Eliot to be where she’s happy. I just check in with them every few days and get progress pics in return, which makes me hopeful she will have a life there with buddies to play with who love her back.

Wil and I always share photos of our pets online and we both have had several people ask us if Luna and Eliot are okay because we haven’t been posting pictures of them lately. It makes me so happy that there is such a large community of people who love animals and support rescue pets and adoption as much as we do, so I felt it necessary and important to talk about what’s going on with these two. The older couple who (let’s me honest) Luna adopted, call us if they have questions or concerns about Luna. They refer to themselves as Luna’s step-parents, which is adorable. We don’t know if Luna is going to want to live there permanently so I still take her to our vet to update vaccines and get her flea treatment, and they have supplied her with the food and treats she loves that we used to give her, and plenty of boxes and scratching posts to keep her happy. And if all works out with Eliot, she will continue to have a life of laser pointer chasing and bird watching from the window with her new friends, which will make her, and us, very happy. 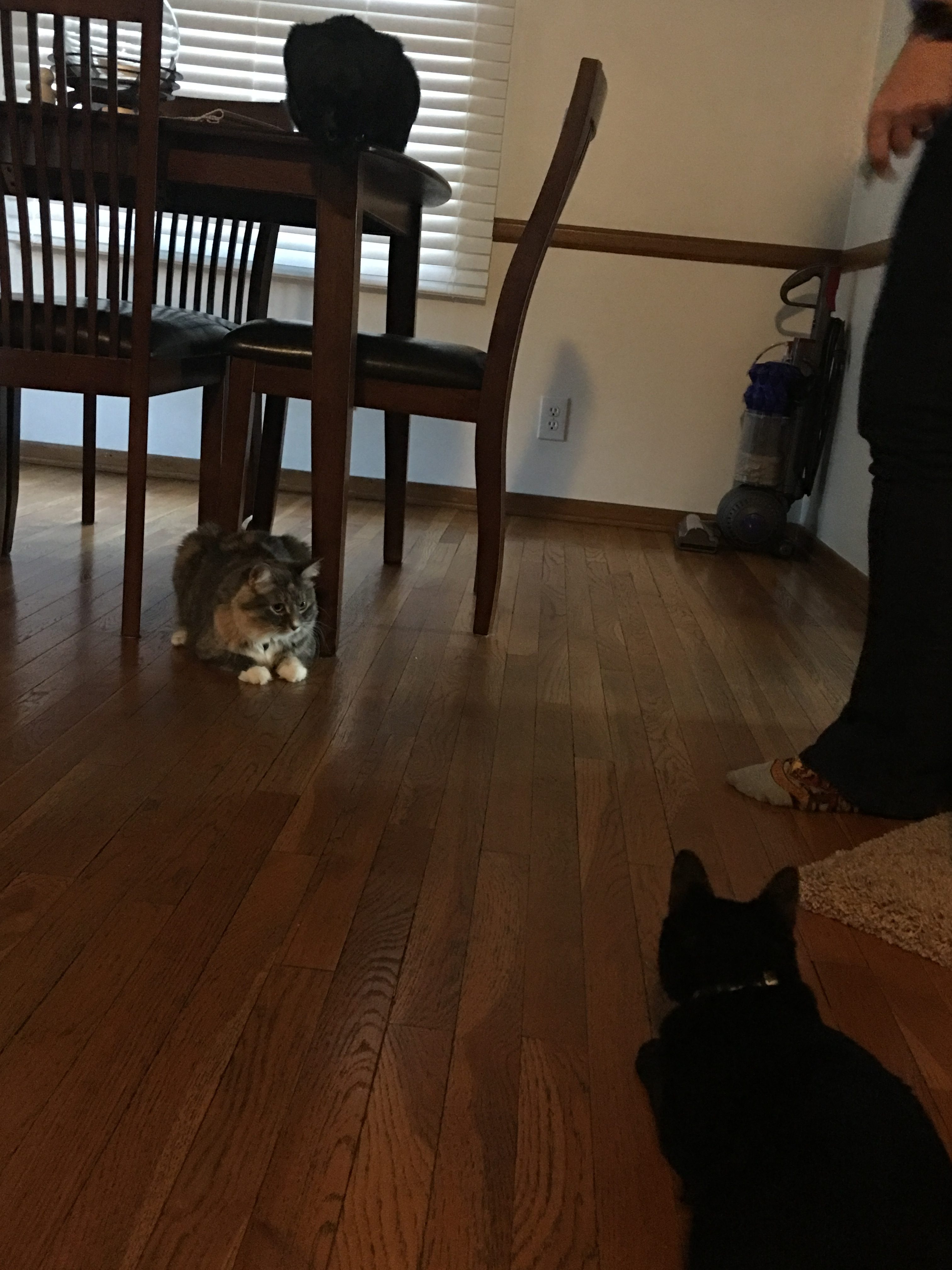 3 thoughts on “Home Is Where The Heart Is”